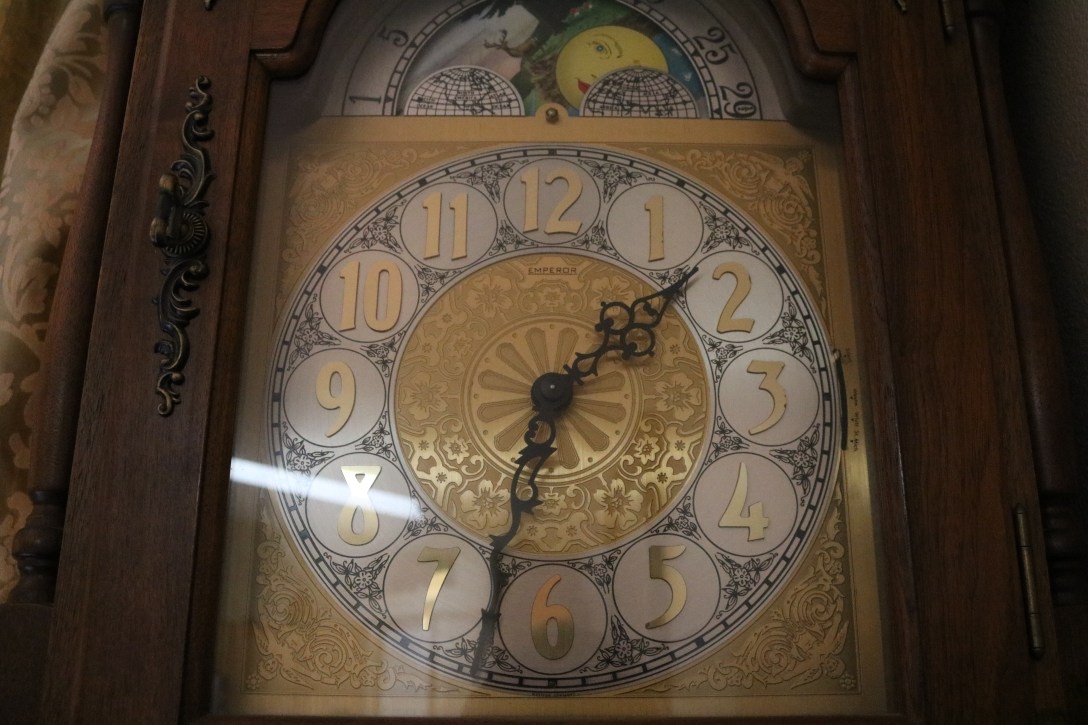 This one’s for my mom.

My grandfather was a craftsman. He took a pedestal table from a yard sale and rebuilt it into a lovely dining room table with slide out leaves. Over the matter of twenty years he built chairs with burlwood accents crafted in to complete the set. There’s a marble top chest floating around the family, a sideboard with inlaid granite, and even a set of grandfather clocks all made from my grandfather.

When the larger of the grandfather clocks passed to me, I was thrilled to have such a piece of our family history. And in transporting it, I immediately broke it. I hadn’t tied the chains for the move and they’d worked their way out of the gears. On top of that, the pendulum fell inside the frame when I went to hang it and broke into three pieces. I about cried.

My grandfather was a prepared man and he must have known the suspension spring that held the pendulum in place was likely to break at some point because he had an extra in the bottom of the clock. So, I set about replacing the broken piece—and quickly found out just how difficult that process was. The spring’s held by a suspension screw that holds a lot of other things in place with it.

Once I got the new spring put in, I set about restringing the chains. (I have no idea if this process has an actual name, but it’s a terror to actually do.) 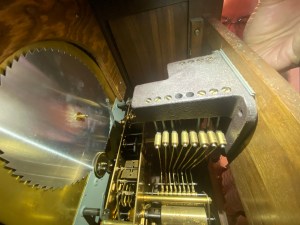 Anyway, lots of frustration later, the suspension spring was in, the pendulum glued back together, and the chains on the gears again and miraculously, the clock was ticking and keeping time.

Let’s jump to my next move. I’d learned, on top of tying the chains, to remove the weights from the clock and move them in a separate container, but I hadn’t learned yet to keep them from shifting. When we unpacked, two of the three weights had squished their hooks. We tried to unsquash them and, being brass, they immediately snapped off. I did sit down and cry then, telling my husband that I was destroying the heirloom my family had entrusted to me. Sadly, there weren’t extra parts inside the clock this time. And ordering parts didn’t work.

So the clock sat, unworking, for years until my dad took it on as a project and found a leaf spring he could reshape into hooks. Working with him on the clock took me back to my childhood when we’d built a side table together from scrap wood. Perhaps the broken clock was an opportunity instead of a travesty. An opportunity my grandfather would have loved because, just like the pedestal table he’d rebuilt, we were reworking the clock and adding to its history.

Down the road, we had to move again. At the destination, everything initially looked good with the clock. We moved it in, untied the chains, and rehung the weights. After leveling it, we started the pendulum and time began ticking again. Then we turned on the chimes, only to find that several of the notes were missing. Two of the rods had snapped inside and were sitting in the base of the clock.

This time there were no tears as we surveyed the damage. My grandfather would have loved the new project to fix it, and we did as well. After trying to get the old rods out, which didn’t work as they’d snapped right at the base and it would have required a tiny drill to get them out that we didn’t have, we turned to finding new chimes.

And so the history of the clock continues. We found new chimes, had to bend the mallets inside the clock a bit to make everything line up, and the clock went from having a sweet, higher tone, to sounding like the deep tones of an old church.

I’ve grown to love it. I don’t look forward to moving the clock, or the possibility of it breaking more, but I love that generations have now had a hand in keeping it running and there’s a part of me that feels a connection to my grandfather who loved to work with his hands.

12 thoughts on “The Grandfather Clock”