As we lead up to publication and pre-orders for Discarded Dragons, I figured an excerpt from the book might be fun. 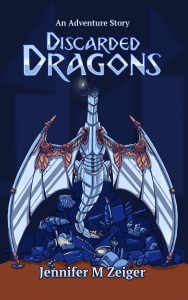 Lead In: You and your friend, Blain, are steampunk dragons who have been thrown away by your Maker for some reason or another. Most of the time, you hide in the giant discard heap that sits on the workshop floor, but you’ve recently started sneaking out to find new parts. Not everyone is happy about this.

Blain fidgets while he watches the Maker and waits for evening to arrive. His heavy, gray tail shoves a piece of copper down the discard heap, where it thuds against the bent pieces of a folding wing.

You told him your next goal is to find him new claws and, since then, his ability to contain his excitement has been strained to the max. Like a child on his birthday, he’d be jumping up and down if such an action wouldn’t draw the attention of the Maker.

As it is, the old man pauses and glances at the pile with a frown. Finally, when nothing seems amiss, he returns his attention to the female’s tail, pitching a broken bolt over his shoulder and into the heap as he does.

Although the Maker didn’t pinpoint Blain’s movement, the female did. After her shriek the night before, you’ve started thinking of her as the Siren. Her ruby eyes glow, fixated on you and your new friend even as the Maker adds pieces to her design.

Above her, Marcus also watches, curled up on his shelf. There’s a faint scratch in his side where the shelf dented him and his claw keeps straying toward the spot like it haunts him. Judging from the narrow gleam in his jasper eyes, he blames you.

The Maker fits the last piece into the female’s tail and dabs in a little glue to help hold it in place. Lifting her into the air, he grunts with satisfaction. He lays her back onto the scarred workbench and clamps the appendage in place to dry for the night before he sets about picking up.

He tosses the extra bits of metal into the discard heap and meticulously places his tools in their homes like soldiers in a line. Done with the tools, he pushes in a few drawers and folds his leather scraps into a neat pile before dusting bits of gem into their box. All the while the Maker hums.

The sound of his voice echoes faintly in the room while he finishes his cleanup and locks the door behind him. After the melody of his hum, the shop feels cold, almost hostile, as silence seethes into the wooden walls. The glitter of eyes does not fade along with the hum. With trepidation, you watch shelves upon shelves of perfect dragons.

“Now?” Blain whispers against your ear. You twitch, surprised by his voice vibrating in the metal of your face.

He almost whines but then settles back beside you to wait.

The Siren’s ruby eyes wink and she huffs in exasperation. Then, slowly, those gems dim until you can hear the soft sigh of her breath in sleep.

Marcus’ deep jasper eyes, however, continue to glitter with light from the skylight. He stretches in a feline fashion and yawns but still those glowing orbs remain fixed on you.

Blain trembles with excitement but he continues to wait for your cue.

Usually, lying in the discard heap is easy business but you too tremble with anxiety and anticipation. Your legs begin to ache as hours pass and those jasper eyes never waver.

The giant globe of the moon passes over the skylight and you’re just about to give up for the night when Marcus lets out an eye-watering yawn that would have rusted his amber face if he had any tears to shed. He grumbles and slowly his eyes dim to dull, green orbs.

You wait awhile longer but his sides continue to rise and fall in steady rhythm.

That’s it for the day! Discarded Dragons will be open for pre-orders here on my website August 15th and will publish September 1st. Thanks for being part of this journey =)