Welcome to the Adventure of the Well. This is the last post for this Adventure, so if you missed the rest of February, here’s a quick recap:

You and Peter, your partner, have found the entrance to a cave system in which you hope to find a mythical Well that grants special powers. You carefully avoided telling the other two of your group, Horace and Arnold, because they work for the unscrupulous Baron Avedo and will probably kill you as soon as you find the Well. When you entered the entrance cavern, you found two levers, one with a raven and one with a salamander. Readers chose to pull the salamander lever. (If you’d like to read this part, click here.)

Pulling the lever dropped the floor from under you and you ended up in a small tunnel. The tunnel narrowed as you crawled through until you found two pressure plates, one in the ceiling and one in the floor. To get past, you have to press against one of them. One bears the symbol for fire, the other water. Reader voted to go for fire. (If you’d like to read this part, click here.)

When you pressed in the fire pressure plate, the tunnel lit up with torches and you found yourself in a small cave with a magma pool and etchings of salamanders on the walls, swirling into the pool. There’s another pressure plate but this one’s unmarked. With the etchings, you started to wonder if the well was filled with magma instead of water. Readers chose to collect some of the magma in a thermos. (If you’d like to read this part, click here.)

Now it’s time to see how this adventure ends! Let’s jump in. =)

“You’re right,” you agree with Peter, “this might be the looniest thing we’ve ever tried but what the heck, let’s see what happens.” You accept the green, metal thermos from his outstretched hand.

The magma bubbles with slow, bulging pops that splatter droplets of fire. You watch, waiting for a brief moment when you deem those bubbles are safely building but not ready to splatter, and then rush in to kneel beside the magma pool.

The thermos grows hot just being near the heat and begins to singe your fingers. You back up, tear a sleeve from your shirt, and use it to hold the thermos as you wait for the bubbles to recede a second time. 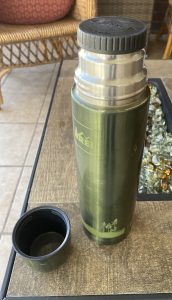 Seeing your chance, you rush in again and dip just the lip of the metal container into the thick magma and quickly tilt it upright to let it slide inside.

The small, crimson glob doesn’t budge. It sticks to the lip of the thermos like fiery glue and then starts sliding, not into the thermos, but up over the lip and down the outside as though it were a slug.

You drop the thermos.

The bottom pings against the cavern floor and the molten slug flies into the air. You throw up an arm to protect your face and the magma hits your bare skin. You scream…and then bite the sound off as the magma expands over your skin, hot like the lick of a campfire’s heat, but not burning.

Your skin tingles, every fiber coming alive as the thin layer of magma flushes across your fingers and up your arm, over your face and down your torso. There’s the sense of cavern walls, cool air, and endless miles of flowing, bubbling magma. It’s such a vast awareness that you lose sense of your own body, of Peter’s frozen, gapping face, and even the small cavern where you found the tiny magma pool, which is only one among many in the system of caves.

You rush through the mountain, seeing the actual Well where it overflows with pure, almost glowing water. You experience the beautiful battle of fire and water where the Well’s water seeps into the mountain, touching the magma within and forever changing it, and finally the breath of air where the magma becomes lava at the spots it oozes from thin cracks in the mountain’s granite.

Within moments, your body’s engulfed in the fire, but not consumed. Coming back to an awareness of your body, you marvel at the myriad of sensations. Lifting a hand, you stare at your fingers, now made of flame.

Wanting to share this new experience, you look at Peter.

Meeting your gaze, he shakes himself and spins, racing for that unmarked pressure plate. 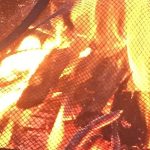 In your new form, you know what that plate does. A thought has you streaming through the air and blocking the plate with your flames.

You open your mouth to tell him it’s okay, only to find you can’t speak. The breath of air you breathe in only seems to make you burn hotter.

You can’t tell him, then, but you might be able to show him. Streaming through the air again, you rush across the magma pool to the far side and use your flame to show him what was hidden before.

You breathe in, flaring brighter, and Peter sees it, a small tunnel opening like the one you exited moments before.

Peter follows you into it, crawling, climbing, and huffing as he sweats in the heat off your body.

“Following you has always been a pain,” he finally grumbles, “but now it’s downright scorching. Think you can tone it down a bit?”

You try, you truly do, but the smaller you make yourself, the harder it is to move. You settle on keeping a little farther from him instead until you show him an exit from the mountain. He cries when he sees it, then pauses.

You shake your head.

“Can you take me to it?” Hope brightens his face.

You want to, but as soon as you think about it, you realize you can’t get him to the Well from here. The very thought of leaving the mountain to reenter where you started fills you with a dread you can’t explain. Somehow, you know you can’t leave anymore. And now you can’t tell him to go out and return to meet you in the original cavern.

Swirling with frustration, you shake your head.

He slumps. “Oh well,” he mutters. “Guess I’ll come back sometime to try again.” And with that he shambles out of the mountain. He doesn’t see the excitement his comment causes you. But you know Peter. Eventually, he will return, and then you might be able to show him to the Well.

So you settle in to wait.

You survived! Thank you for joining the adventure this month =)

(If you like Adventure stories, check out my book The Adventure either here on my Website or on Amazon.)