To recap: Last week, you dropped in on an old man who lives in the middle of nowhere because all evidence points to him being the culprit behind the food heists happening along the road into the town, Layfatte. It seems odd, but you find he has a ton of food for just himself. As you’re asking him questions, the trunk by his bed gives a thump. When you investigate, you find clothing, and no bottom in the trunk. The old man dons his hat while you’re distracted and starts to grow into a giant. A tiny, twig like creature appears from inside the trunk and tells you IN or OUT. The vote went strongly toward diving into the trunk to get away from the giant. (If you’d like to read part one, click here.)

Let’s see what happens next!

Twigs and the Giant Option A. Dive In

A breeze, like winter air through thick pines, wafts from inside the trunk. Glancing back, you shudder to see the old man almost as tall as the ceiling and still growing. The grin on his face stretches ear to ear. You don’t resist when the twig creature tugs on your arm again. In fact, you push off with your feet to slide into the trunk all the faster.

The twig creature screeches, surprised, as you slide into the tight confines with it, and then you pass through the empty trunk bottom and thud into a soft patch of blue-green grass. Breath wheezes out of your throat where you lie on your stomach. The twig hops to its feet and stares up at the sky where a deep belly laugh echoes like you’re still inside the tight confines of the wooden chest although there are no walls that you can see.

There’s a thunk, and then a click that echoes into the sudden silence left after the belly laugh. You follow the twig’s gaze upward, flipping over to stare at the purple-gray twilight sky and a small patch of wood floating like a cloud in the otherwise clear expanse.

“I just jumped from the frying pan into the fire, didn’t I?” you mutter.

“Not really,” says the twig. “He doesn’t fit in here, so least aways y’r a little safer here.”

You roll your head to look him. “What are you?”

He puffs up his skinny chest and proudly proclaims, “I’s called Spree. And that’s Arwee, and that’s Alsmee, and that’s Brismee…” as he talks, other small, twig creatures peek out of the trees surrounding the glade you landed in. Some are thicker, some shorter, some are so thick with leaves sprouting from their heads that it looks like green hair. 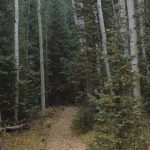 You sit up, realizing there’s no way you’ll remember all their names. Dozens of them creep out of the trees to create a loose circle around you.

One tiny creature dashes forward to poke you in the arm, and then skitters away giggling. A matron snags the kid and pulls it close with an admonishing sound.

You repeat your question when Spree finishes the introductions. “But what are you?”

You shake your head.

“Tell me,” you encourage.

Spree puffs himself up again. “We’s the forest’s gardeners. We trims and plants and do important stuffs for the forests.”

“Nowt anymore, we don’ts,” mutters a stout twiglet. You think his name is Brismee.

Collectively they look up. “He’s captured us. And he holds the Matriarch. We’s now do as told.”

It all clicks together for you. The old man must need an enormous amount of food if he’s actually a giant, but there’s no way he’d be able to sneak into the camps of those traveling into Layfatte without being noticed. Instead, he captured himself these tiny creatures to do the dirty work for him.

“Your Matriarch,” you ask, “he’s holding her hostage somewhere?”

The tiny twiglet that poked you before breaks loose from the matron and skitters up your leg to stand on your knee. “She’s caged,” he cries. “She doesn’t even have the twilight glen to smells the forest breezes.” Remarkably, a tear trails down his face, leaving a trail on the bark like surface. You wipe it away only to find it’s sticky.

“If you get free, you could help her and leave the giant high and dry in his food heists?”

They all grin. Every single twiglet shows rows of blunt, brown teeth. It’s creepy, but then, at least they have some sort of defense.

“What are you’s proposing?” Spree asks.

You take a moment to consider. The giant has to open the trunk at some point for his next heist. At which point, you could jam the lid and sneak out while he’s away. However, that still leaves the giant wandering around free. There are enough twiglets that you might succeed in overwhelming him if you all worked together.

Thank you for joining in the adventure today! Leave your vote in the comments below and we’ll return next week to see how this adventure continues =)

14 thoughts on “Twigs and the Giant Option A: Dive In”