Welcome to the New Year! We’re going to do something that we’ve not done in a while, we’re going to go on an Adventure!

So without further ado, let’s see where we start.

Twigs and the Giant

It’s impolite to show up unannounced right before dinner…which is why you did it on purpose to the old man’s cabin. The log cabin sits out in the middle of nowhere, so it’d be rather suspicious for the old man to turn you away as the smells of cooked meat waft from inside. Plus, it gives your suspect no time to prepare for you.

Because he is a suspect of the food heists. Dozens of wagons and carriages have been stolen from on their way into Layfatte, usually in the middle of the night, thieves unseen. And now the town’s starting to feel the pinch of too little food. The Mayor sent you out to investigate after his usual detectives failed in figuring out just who is stealing the town’s food.

Now, although it seems so unlikely it’s laughable, your only solid suspect happens to be the scarecrow of an old man who sits across from you at the wooden slab of a table in his single room log cabin.

You’d walk away, laugh at yourself for being daffy, but your gambit worked. The table before you groans with food.

Even as the old man claims “Nah, it’s just me hangin’ around,” you stare at the platter of sliced apples, the smoked ham, and a steaming heap of mashed potatoes. There’s even a plate of cookies waiting on the window sill. It’s enough to feed a family of five or six, much less one scrawny old man whose ribs show through his threadbare shirt. 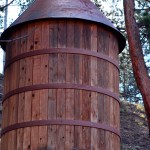 You’re trained to see the things that just don’t fit and, well, this doesn’t fit. The kitchen’s a wooden slab set across two barrels, a wash tub, and a potbellied stove. Out here, where the closest neighbor is five miles away, where did all the food come from?

You must have stared at the spread a bit too long because the old man begins to fidget, his heel tapping a rat-a-tat against the dirt floor.

“I’ve nothin’ to be concernin’ the mayor’s investigator with,” he mutters, crossing bony arms across his chest as he leans back in his chair.

“Well,” you say, “I’d like to believe that but there’ve been attacks along the post route, supplies are being taken. Mostly food. And now the Mayor’s looking into it because the town’s starting to run low. You wouldn’t know anything about that, would you?”

The old man almost reaches for an apple slice, thinks better of it, and shakes his head. “Just me ‘n my horse, Bonnie, out this ‘a ways. I wouldn’t know the first thing about sneaking food stuffs from travelers.”

“Hmm,” you lean back in your chair as well, mimicking his attempt at nonchalance, “I never said how the food’s being taken.”

He goes still at the exact same moment that a wooden chest beside the bed gives a thump. He jumps to his feet as you move to stand.

“Nowt but me, I promise!” He tries to block your way but he seems unwilling to lay a hand on you, so you simply sidestep him and approach the chest. You flip the lid open and stare at the contents.

A couple folded wool shirts, A spare pair of boots that look like they’ve never been worn, and a hat that’s too large for the old man.

You pick up the hat and the old man groans. There’s nothing under it. Literally nothing. No trunk bottom, no dirt floor, not even a hole where the old man could have dug out a tunnel. It opens into empty space.

Setting the hat aside on the bed, you reach inside. Your fingers encounter nothing. “What’s this?” you look askance at him just in time to see the old man don the hat.

Sure enough it sits down past his eyes, but you can still see the toothy grin that spreads across his stubbled face. “Tried to warn ya,” he says, his voice deepening into a low base as his shoulders begin to fill out into those of a much younger, much bigger man. He thumbs the brim up as his head fills into the hat and his body starts to grow taller.

Something grabs your hand where it still dangles into the empty space inside the chest. A quick glance meets the tiny eyes of a creature the likes of which you’ve never seen before. Stick like legs and arms, leaves growing out of the top of its head, and a body like a twig snapped off from a tree. It gives you an oddly pointy toothed grimace.

A. Dive into the chest?

B. Scramble for the door?

Thank you for joining in January’s Adventure story. If you’re unfamiliar with how these work, you vote in the comments below for whichever option you’d like to pursue. Then next Thursday I’ll post whichever option gets the most votes. This will run for four weeks, with a total of three votes before you find out how the story ends on the fourth post.

Until next week, blessings,

20 thoughts on “Twigs and the Giant”