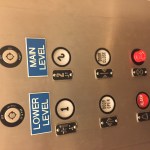 It’s the dreaded question. Even if it’s a close family member asking, trying to answer the question brings a sinking feeling to the pit of the stomach, or sweaty palms, or heaven forbid, stuttering.

“What’s your book about?”

How do you take a novel and squish it down into a couple sentences that will tell enough about the story to be comprehensible and engage the person listening? In the industry, it’s referred to as the “Elevator Pitch.”

If you stepped into an elevator with an agent or editor, could you sell your book to them in the brief time between the doors closing and reopening.

To be honest, I still don’t have a pitch I could quickly blurt out for Quaking Soul. Having done book signings with The Adventure, I could probably come up with something on the spot.

“This is a book in which you’re the main character and you can make choices about how the story goes. You can explore caves or fight in tournaments and your decisions lead to one of twenty-six different endings. Check it out.” (Hand them the book and let them explore).

“Do you like to read with your kids?” (And let the conversation follow. Although this may or may not work on an agent since they may not be followed by their little mini-me.)

However, the cover blurb is one step in the right direct to coming up with an elevator pitch. This would not roll off my tongue at a book signing. It’s just too much for that. But on the cover it seems to work out fine.

So, if you were to pick up Quaking Soul in the store and turn to the front flap, this is what you’d find: This was it. This was Na’rina’s chance to prove to her mother and the dryad Council she could navigate the mythic and human worlds. With night hanging over the city, all she needs to do is sneak in unseen, attend a mythic meeting, and report back. If only she knew who had called the meeting in the first place.

Na’rina’s a young Drydanda, destined to be Queen of the Dryads, or tree nymphs. Her world—fauns, nymphs, dwarves—hides in plain sight from the more populated human world. As long as they remain myth, they remain safe.

He’s come to warn them but he’s a wer-im, a werecat, who was banished centuries ago with the rest of his species for burning the dryad’s trees. But humans captured his leader and dozens of other mythical creatures as well. If the mythic world is to survive, he must forge alliances.

When Na’rina’s mother goes missing, she finds the violent, banished wer-im her only allies. She soon realizes that everything she’s been taught in preparation for leadership appears to be wrong. Who can Na’rina trust while attempting to keep the dryads alive in her mother’s absence? As she quickly discovers, the fate of the mythical world rests on her decisions.

Thanks for stopping by!

P.S. Next week I’ll share with you some of the beautiful chapter headings done by Esther Rohman!

10 thoughts on “Elevator Pitch? Getting Closer”