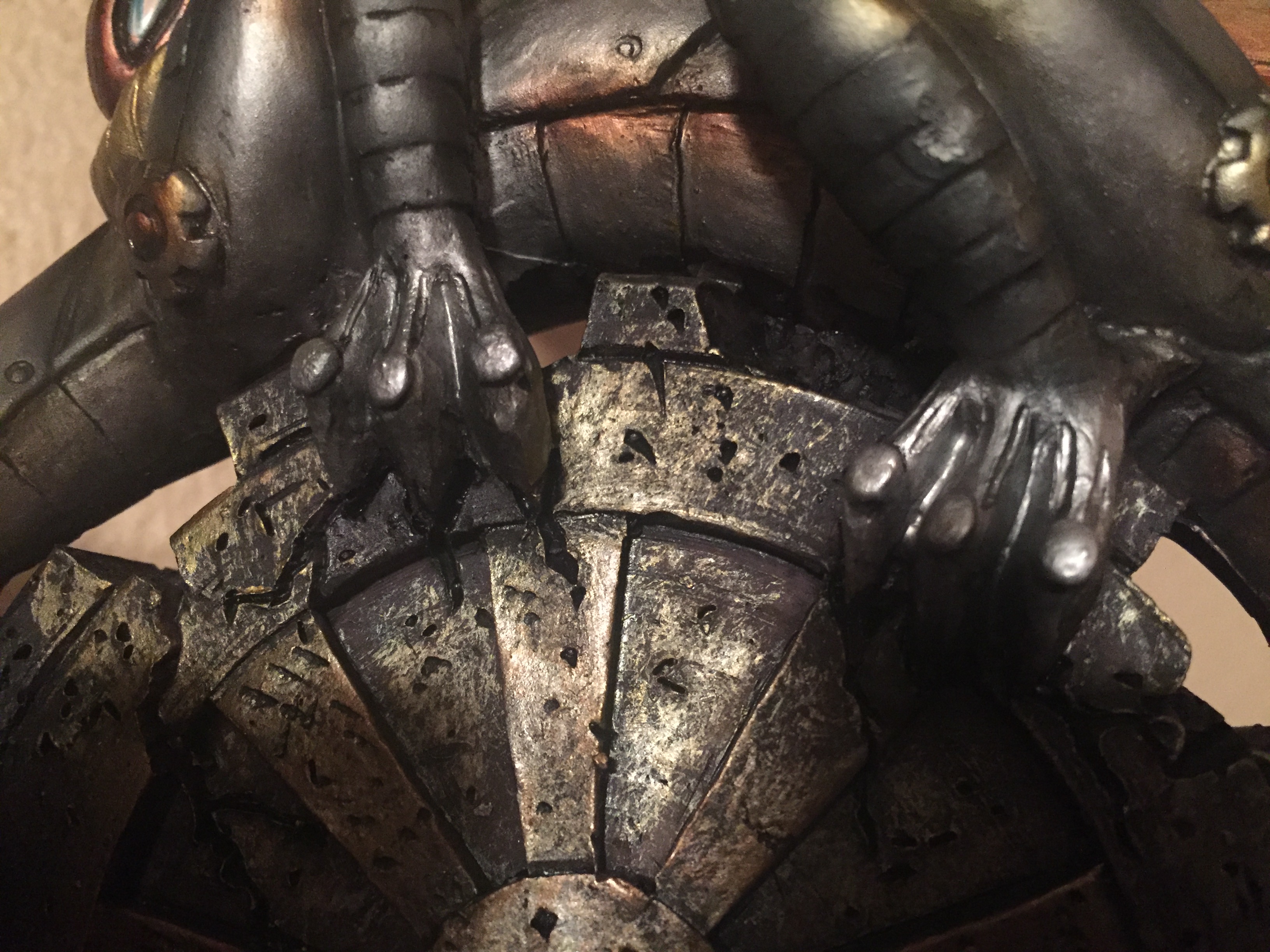 (Side Note: Kat at the Lily Cafe is hosting an interview of me today regarding The Adventure. Stop by and give her a hello =)

Now, welcome to the third week in the Discarded adventure!

If you missed the previous weeks, just know you’re a metal dragon who has been discarded due to your weak wings. Now you’re trying to finish your body at night while the Maker’s away. You managed to get to the gems for a new green eye but the current work-in-progress caught you in the act. When you offered her a gem, she snuffed your offer and woke up all the others. In your fight with the ‘perfect’ dragons, one of the other ‘discards’ came to your aid. Now you’re going to help your new friend, Blain, get new claws. Let’s see if you succeed.

Blain fidgets. His large, gray tail shoves a piece of copper down the discard heap, where it thuds against the bent pieces of a folding wing.

You told him your next goal is to find him new claws and, since then, his ability to keep his excitement contained has been strained to the max. Like a child on his birthday, he’d be jumping up and down if such an action wouldn’t draw the attention of the Maker.

As it is, the old man pauses and glances at the pile with a frown. Finally, when nothing seems amiss, he returns his attention to the female’s tail.

Although the Maker didn’t realize Blain’s movement, the female did. Her ruby eyes glow, fixated on you and your new friend even as the Maker adds new pieces to her design.

Above her, the amber male who attacked you the night before also watches from his curled position on his shelf.

The Maker fits the last piece into the female’s tail and daubs in a little glue to help hold it in place. Lifting her into the air, he grunts with satisfaction. He lays her back onto the scarred workbench and clamps the appendage in place to dry for the night.

Extra bits of metal are tossed into the discard heap and tools are placed each in their specific homes at the back of the bench.

Drawers get pushed in, bits of gem are dusted into their box and leather scraps are neatly folded. All the while the Maker hums.

The sound of his voice echoes faintly in the room as he finishes his cleanup and locks the door behind him as he leaves.

Silence settles into the wooden walls but the clear glitter of dragon eyes does not fade along with the sound.

He almost whines with angst but then settles back against your side to wait for your timing.

The ruby eyes of the female wink and she huffs in exasperation. Then, slowly, those gems dim until you can hear the soft sigh of her breath in sleep.

The deep jasper eyes of the amber male, however, still glitter with light from the overhead window. He stretches in a feline fashion and yawns but still those glowing orbs remain fixed on your position.

Blain’s side trembles with his excitement but, thankfully, he continues to wait for your cue.

Usually just laying in the discard heap is easy business but your own muscles are strained with anxiety and anticipation. Your legs begin to ache as hours pass and those jasper eyes never waver.

The giant orb of the moon passes the window above and you’re just about to give up for the night when the amber male lets out another yawn. It’s an eye-watering sigh that would have rusted the male’s face if he had any tears to shed. He blinks several times and, while you watch intently, his lids droop until his eyes are closed completely.

You wait awhile longer but his sides rise and fall in steady rhythm the entire time.

Oddly, his muscles relax as he moves to stand. Perhaps now that he has actual motion to occupy his anxiety, the torturous tension fades away.

The face of the workbench is littered with small drawers holding various hinges, nuts, bolts, molded metal and more. Thankfully for this night, you’re headed to a drawer holding premade claws. Within its divided interior are claws for every shape and size of dragon. Unfortunately, that drawer sits just below the top of the workbench.

You follow Blain to the base of the bench and look upward to your target. The discard pile is large enough that you’re still standing on the fringes of it as you start your climb.

Blain offered to carry you but you asked him to keep watch instead.

He flies up until he’s even with the drawer and waits, all the while watching the amber male and the half-finished female as they sleep.

Only when you’ve reached the drawer and have it open far enough for him to land in it does he join you at the bench.

He settles into the drawer and gives a soft crow of delight at the claws inside. His long gray tail hangs out over the face of the drawer as he starts to test each claw one by one.

You shake your head. “No, Blain,” you say, “You need bigger claws than those.” You push the drawer open farther and select a thicker piece. “Try this one.”

He presses it to the hole in his front left paw where his index claw should be. It gives a soft pop as it slides into the socket.

“Yay!” Blain holds it up in excitement.

He ducks his head and glances up but the amber dragon doesn’t stir.

You both hold your breath for a moment, just to be sure, but nothing happens.

You select another claw for Blain to try. Again, this one pops into place, a perfect fit even if it is a deep red against his overall gray.

“One more,” you say and delve deeper into the drawer for a thicker claw yet.

You select one and hand it over.

Blain flops onto his haunches and tries to reach for his rear, left foot but whatever injury prevents him from turning to the left also makes him stiff to bending forward.

He hands over the claw and you test it on his hind foot. You’ve an eye for this sort of thing apparently because it too pops into place. You grin at Blain and his yellow eyes return your excitement.

“GAH!” he exclaims as he tumbles backwards.

His body is hauled over the face of the drawer and it’s then that you see the amber dragon has him by the tail.

You jump, landing squarely on the male’s back. Between your weight and the powerful pull of Blain’s wings, the amber male can’t control his flight. He lets go of Blain’s tail and rises into the air.

Before he can get too high, you roll off his back and land on the scarred workbench. The female jerks awake at the thud of your landing.

At the same time, Blain lands beside you and so you’re both caught in the blast of the female’s siren cry. It flattens you to the surface of the bench.

All sound seems deadened as she runs out of breath.

The amber male lands just to Blain’s left and flares his wings in challenge.

Not many sounds would register on your deadened hearing at this point but one clear, single sound does. The click of the lock.

The Maker’s arriving for work.

If he catches you all just as you are, he’s likely to dismantle every single one of you. If you jump into the discard heap, you might survive but Blain cannot turn that fast. Either the amber male will catch him from his damaged left or the Maker will see him. You negate the idea of leaving him behind as not an option.

You could shove him into the discard heap but you’re likely to take the full brunt of the amber male’s attack if you do.

Or you could continue to fight beside him and hope for the best with the Maker.

Cast your vote in the comments below. We’ll be back Thursday with whichever option gets the most votes and we’ll see how this adventure ends!

(P.S. Again, if you’re interested in seeing the interview at the Lily Cafe, hop on over here!)