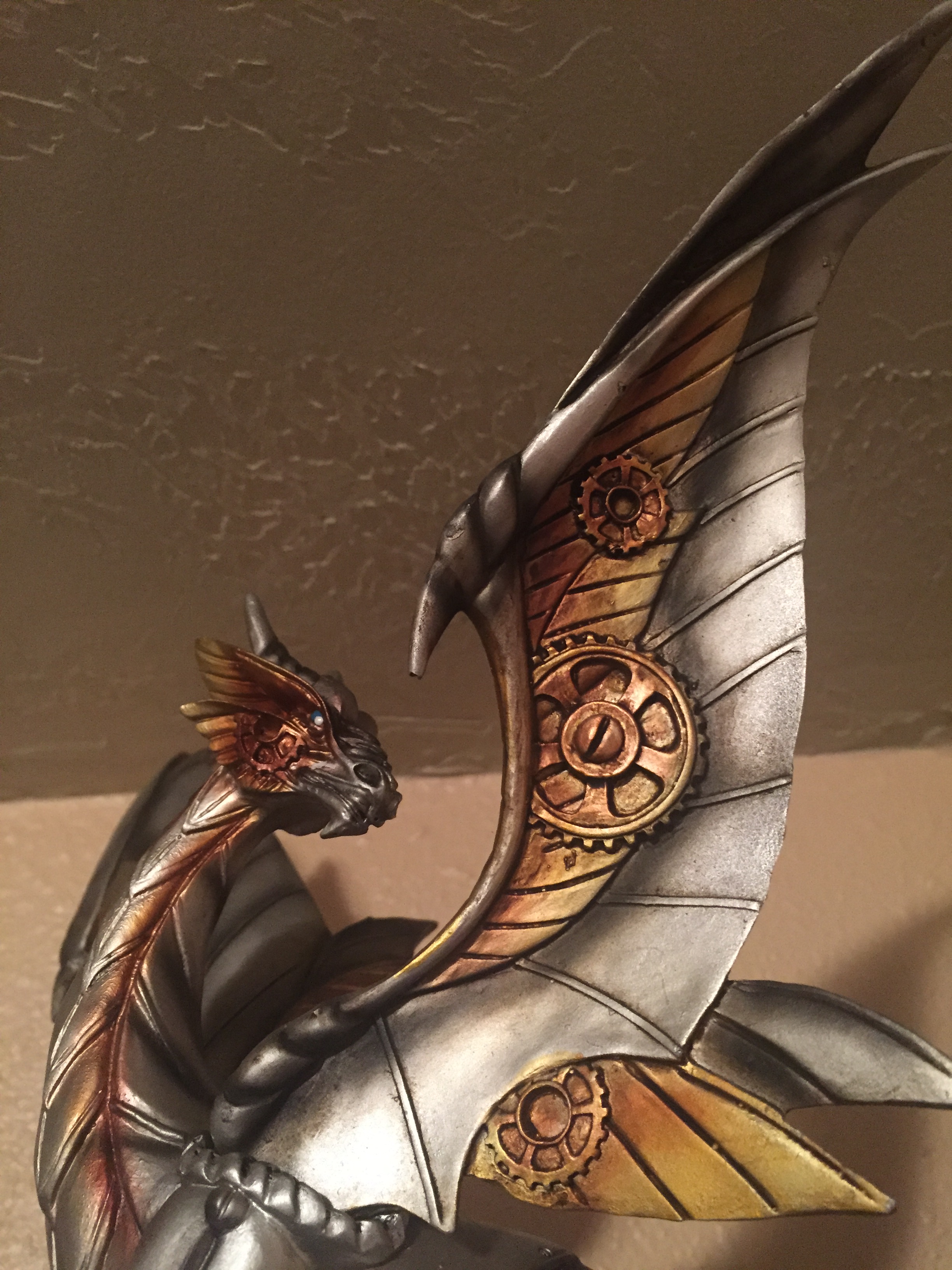 Welcome back for the second post in the Discarded adventure! If you missed last week, just know you’re a metal dragon who has been discarded due to your weak wings. Now you’re trying to finish your body by taking from the other discard piles. You managed to get to the gems for a new green eye but the current work-in-progress from the Maker caught you in the act. You’re about to offer her a gem. Let’s see if she takes it.

Discarded Option A: Offer A Gem

The box of discarded gems glitters in the faint light from the overhead window, displaying blues and greens and reds of varying shades. You grasp the closest blue, a lovely oval the size of a grape, and hold it out to the small female.

Her nostrils flare with a huff. “Those are all flawed, just like you.” And she opens her mouth to reveal tiny points of teeth lining her jaw.

The cry that pierces the air from her throat flattens you to the scarred workbench. Your nerves shudder in protest. Not a dragon in the shop could have slept through that siren.

An amber dragon twice your size thuds to the bench behind you, cutting off your escape to the discard pile. With your green eye, he almost looks brown.

Another female with a rounded belly and massive, layered wings coasts down to stand protectively over the half-finished female.

You spin on your tail and toss the blue gem at the amber, male dragon’s face. Although you’re small, your aim proves perfect. The gem smacks solidly against the dragon’s forehead just between his eyes.

He rears back with his multi-plated wings extended for balance, all the while blinking furiously to clear his sight. It’s the opportunity you were hoping for. While he’s still unfocused, you dart under his wing. You’re just about to lunge off the side of the workbench when his tail flashes out to curl around your left wing.

Your momentum is too great and the wing pulls free from your side with a screech of metal.

With a disgusted ‘ugh’, he tosses the small appendage at you as you tumble over the side of the bench in an uncontrolled fall.

You curl into a ball, expecting to hit the discard heap with a painful thud. Instead, sharp claws bite into your tail and you’re hauled skyward by the amber dragon. His multi-plated wings beat powerful strokes to lift your combined weight.

You scream at him in anger. The thud into the discard pile would have been better than this. Curling up your tail, you sink your own claws into his legs.

He snaps his teeth but can’t quite get his head low enough to catch you without unbalancing his flight. Once he reaches the height of the overhead window, he drops you and your claws are too weak to hang on.

From this height, you’ll shatter when you hit the floor. You grab for a shelf as it spins past but the piece of wood isn’t actually attached to the wall. Instead, it’s simply set on a few braces. When you grab ahold, it flips into the air behind you.

A small bit of satisfaction hits you when you see the shelf glance off the amber dragon’s side. It dents his otherwise perfect frame.

There’s nothing else to stall your headlong fall.

A heavy whoosh of air hits you and your sight spins in erratic jerks before settling. You’re no longer falling uncontrollably.

You twist to look up and find a massive beast slowly lowering you to the discard heap. He cradles your small body in his thick claws.

Once he’s set you down, he backs up awkwardly and lands beside you with a crunch of metal. It’s then you see this gray beast is missing several claws, has a heavy dent in his forehead, and can’t turn to his left without turning his entire body.

You see this last bit as he turns to stand guard over you.

The amber dragon above halts his flight downward and hovers in place.

“Enough,” says the beast that saved you. His speech is slurred from the way the dent on his head curves part of his mouth inward. You’re surprised that whatever caused the damage didn’t finish the dragon completely.

The amber male huffs and tosses one of the discard gems at you before turning away.

He settles back onto his shelf and pointedly ignores the discard heap while he works to remove the dent the shelf left in his side.

Slowly, the other dragons settle back in and go to sleep. Even the red gleam of the half-finished female finally fades to sleep.

When all is quiet again, the beast guarding you picks up the remnants of your left wing and offers it to you. He smiles in a crooked, almost dopey way.

“Thank you,” you say as you let him snap the wing into place. It’s loose now but at least it’ll help your balance.

“That was awesome!” he exclaims.

“Shhhh,” you caution and you both look at the shelves full of dragons. The amber male opens one eye to make sure you’re not moving and then goes back to his rest.

He nods vigorously and off balances himself enough that he has to step sideways. There’s a crunch of metal.

“What are you going to fix next?” he whispers.

“I’m waiting for tomorrow night to do anything else,” you tell him.

“Yeah, but what are you going to fix?”

You stare at him and the fire that brightens his yellow-gold eyes.

He happily settles down into the discard heap and motions for you to settle beside him. You take the invitation and take comfort in the solid structure of his wing as it settles protectively over you. Unlike the amber male, Blain’s wing is a solid piece that doesn’t fold in against his side. However, what it lacks in mobility it makes up for in strength. He could have easily carried twice your weight without breaking a sweat.

You think on his question. New wings would be ideal. If you can fly, a world of other options opens up for you.

Blain starts to give a slight metallic snore as he falls to sleep. He twitches and his claws open and close in reaction to a dream. You stare at the holes where he’s missing claws. It doesn’t seem like much, but without those claws, his balance is even more precarious.

Please cast your vote in the comment section below. Next Thursday we’ll explore whichever option gets the most vote.

17 thoughts on “Discarded Option A: Offer A Gem”