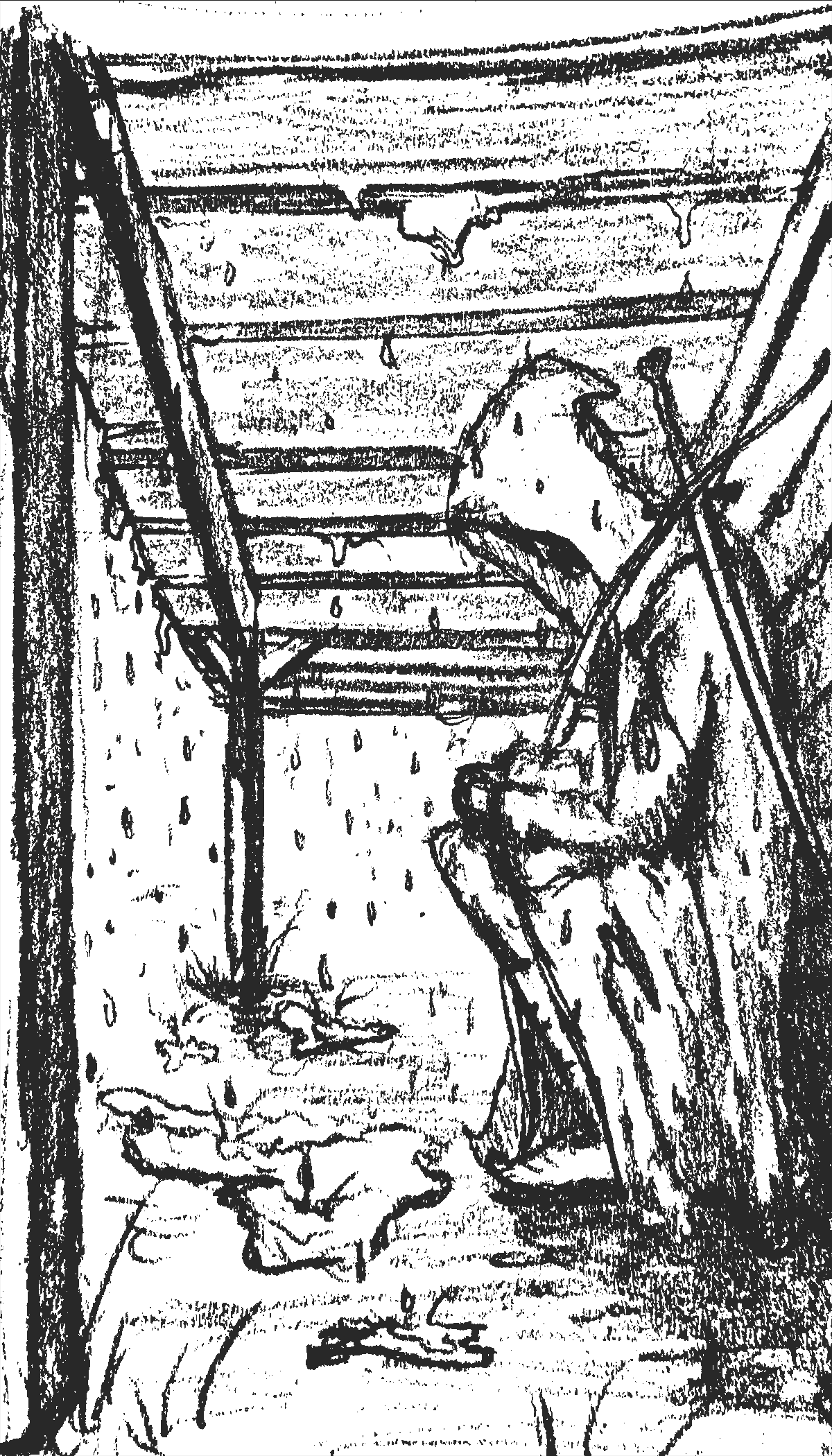 Rain drips from the porch above, and the siding of the building weeps with moisture. For the moment, though, you’re dry. Your small, sheltered spot is just a protected piece of cobblestone. It’s a two-foot by two-foot section where the rain isn’t drenching the ground. There’s not even enough space to lie down, but the spot’s yours, and as long as you don’t move from it, no one will challenge you.

You’re not homeless. You just can’t find an inn that’s not already full because of the tournament being held at the coliseum. Considering the situation, you may as well be homeless, but at least you’re a well-armed homeless.

Thus why no one will challenge you for your shelter.

A sword peeks over your right shoulder from its scabbard on your back. From your belt hangs a woodsman’s knife the length of your forearm, and in your right hand you hold an unstrung bow. Over your left shoulder, the fletching of your arrows plays peek-a-boo around the hood of your dark cloak.

All of the weaponry right now is just extra weight. Your cloak is the prize possession with the rain. Its wool weight settles around you with delicious warmth as its outer layer beads the bit of rain that reaches you under the porch.

You sigh, reminding yourself that you’re putting up with this for a reason. The tournament boasts a number of challenges including fencing, archery, jousting, and hand-to-hand combat. They all pay well for each winner.

You’re not here for the pay, though. You’re here for a person. You’ve heard nothing from your family since you chose to be a woods ranger instead of a baker like the rest of them.

But a few days ago a messenger found you where you were hunting in the forests to the north. He settled on the ground opposite your campfire and warmed his chilled fingers as he passed along the message your family sent with him.

“King’s men took your Uncle Ruben,” he said, “because your family can’t pay the rent on the bakery. He’s been sentenced to working the quarry until he pays off the amount due.”

“What do they want from me?” you asked, perplexed. You passed across the fire a mug of warm tea to help the messenger fight off the night’s chill.

You’ve got no influence in the King’s justice system, despite being one of his rangers. Working the quarry is hard, dangerous work, you know, but the bakery’s debt can’t be that high. Ruben shouldn’t be there that long.

The messenger sipped several times before continuing his message. You wondered how long he’d been searching for you.

“The family hasn’t paid in well over a year,” the messenger finally explained, giving you a sheepish look. It’s probably the same look your family gave while telling him, a complete stranger, their issue. “Ruben’s assigned the quarry for the next five years to pay everything off.”

Dread settled a heavy stone into your stomach. No one survived the quarry that long.

“All right,” you conceded, “what does the family want?”

“In the King’s tournament, you can ask for the release of a worker if you win one of the challenges.” As he said this, the man eyed your bow where it sat against a nearby tree and the sword laying on the ground beside your knee.

You had an “ah-ha” moment. No one in the family could win such a challenge—except you. You considered refusing. The family hasn’t spoken to you in years, much less lent a hand whenever you needed something, but this was about a man’s life, family or not.

“When does the tournament start?” you asked.

“Beginning of the week.” Again, that sheepish look came over his face.

And now you’re hunkered under a porch instead of sleeping in an inn because, by the time the messenger found you, you only had two days to get to the capital.

An inn wouldn’t have helped much anyway, you tell yourself. There’s only an hour or two before sunrise, at which time you have to be at the coliseum to check in as a contestant.

As you wait for the warmth to arrive from the rising sun, you debate whether to try archery or fencing. You’ve never attempted jousting and don’t want to start now. As a last resort you can try hand-to-hand combat, but that’s not your forte, and you’d prefer to start with your stronger skills.

Do you pick Archery or Fencing?

This story was so fun to write. Research can be overwhelming or really interesting. This story, researching long bows and such, proved to be really cool.

For more, check out The Adventure on Kickstarter…

The Adventure will be available on Amazon at the end of November.

6 thoughts on “A Peek Inside The Tournament”